Shared passwords, sensitive documents: mailboxes are great targets for attackers. Would you know they were targeted? We’ve got your back! Our Office 365 token deploys to thousands of mailboxes in minutes and alerts you when someone is snooping around.

Enterprises have been flocking (ha) to Office 365 for years now and a large number of Thinkst customers are using it. The Canaries will detect attackers on their networks, but nothing lets them know if an attacker has compromised a single mailbox and is snooping around.

The Office 365 Mail token can drop a pre-written, tokened email into multiple mailboxes at once. We insert the emails into mailboxes automatically, so it avoids getting caught by email security filters. We avoid dropping it in the default inbox so users won’t stumble on it accidentally, but an attacker searching for booty can still quickly find it and trigger an alert.

To deploy this token, there are a few easy steps.
When someone stumbles upon the trap, you’ll receive an alert like this one. 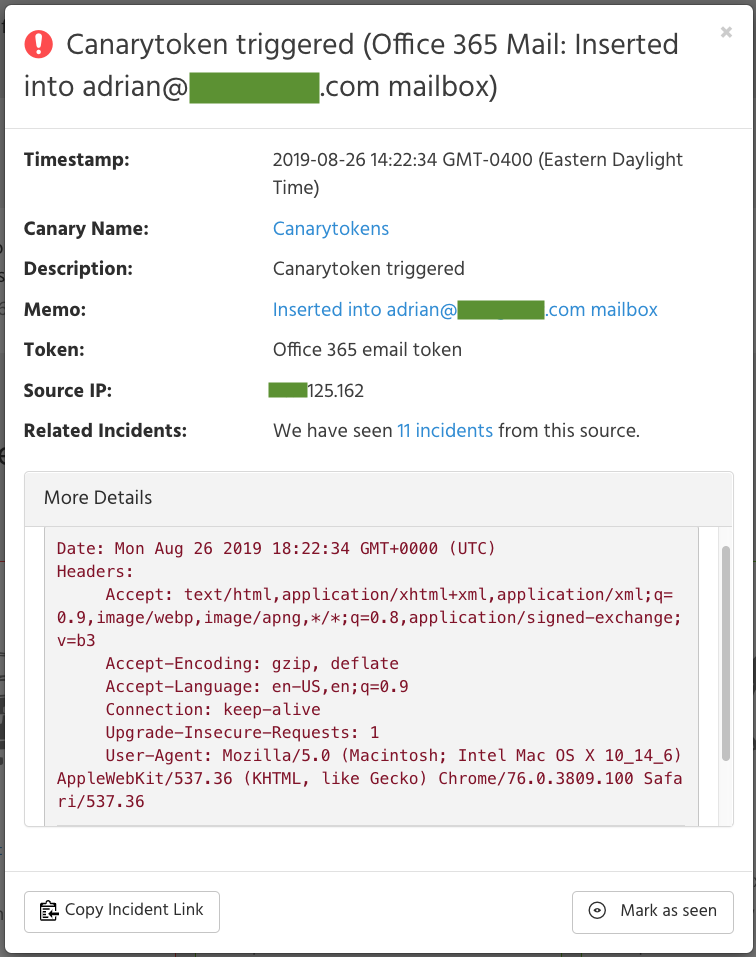 While it’s difficult to rule out false positives altogether, we employ a few tricks to avoid them that require no additional effort on your part. First, we place the email in the archive folder, reducing the chance of legitimate users finding this email in their own inbox. Second, because we insert the email directly into the mailbox, we avoid security gateways inspecting tokens directly and creating false positives.
Tokens like this are great for the attacker details they give you, but would also be useful just as a heads up. Someone just searched for password reset emails in Bob’s mailbox. This is probably something you should be aware of.

With the Office 365 Mail token, we’ve gone from some basic token ingredients to something that simply scales to hundreds of mailboxes in the same 3-4 minutes it takes to deploy a Canary. That’s it – quick, easy and likely to catch the bad guys.
For more thoughts on Canarytokens, check out our post on the AWS API Key token. The official documentation for Canarytokens is a concise and useful read as well.